From a multicultural and complex Rome, here is the most eclectic folktronic songwriting with pure energy by synth and stubborn voice. 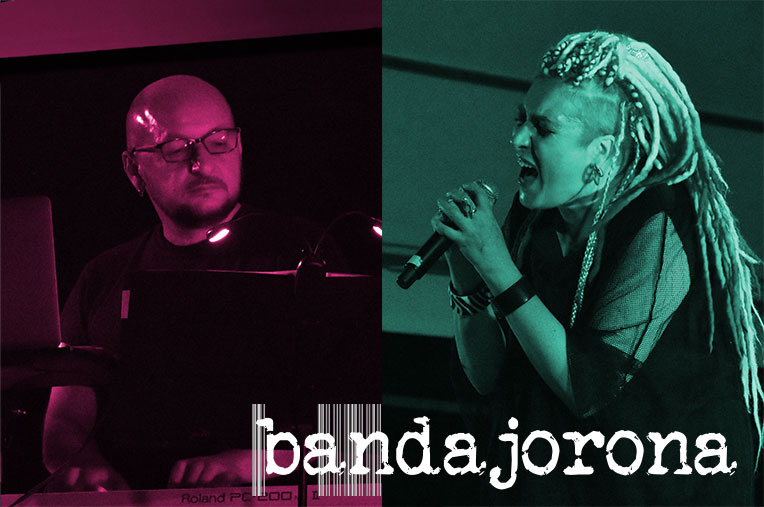 If you were born in Rome, Italy, you can’t be immune to the spirit of this city: in BandaJorona folk and neo-folk, with a capitoline matrix, meet electronic vibes, involving texts who go from social denunciation to a private approach, from political to demotic. All brings an innovative and eclectic project to life, where a female impact is very clear.
BandaJorona’s constant evolution in the research for sounds and lyrics comes to evidence taking a look at the new post-pandemic team, where traditional and popular musics migrate toward rhythmic and sound frameworks in their max bpm power, thanks to a massive use of audio sampling and synthesizers. The collective intervention to the musical production shows itself in the group’s folktronic scenario, which gets more mature with a wider artistic and intellectual experimentation, on the way to its fourth album, close to being launched. Jorona’s strong personality and voice, the band’s founder and storyteller, will be the usual guidance.
Neverending research, audience and critics’ appreciation and loads of original artistic performances keep the band among the main representatives of the “Nuova Canzone Romana”, always following the same great goal: singing the reality of our jagged current times.

Our journey began in 2001, with a careful research about love stories, jail and knives, all touched by the bloody and romantic fluid we found flowing in Rome’s veins, but also reminding us of the Latium musical testament by Graziella Di Prospero, artist and researcher, who has been fundamental for us. We also couldn’t miss the constant references and connections with Gabriella Ferri’s expressive and vocal force.

Then came the experience with the attendance of parties related with Lega di Cultura di Piadena and also other events planned by “Ernesto De Martino" Institute in Sesto Fiorentino, the concerts with great names of "Dischi del Sole", among whom Ivan Della Mea and Giovanna Marini, and the shows the ensemble gave in Milan, Turin, in Piazza Castello and at the Teatro Carignano, planned by Comune di Torino and Teatro Stabile, at the Notte Bianca in Rome, the musical contributions in documentaries and video clips, the planning and the hosting of "Un certo modo di essere Roma. Omaggio a Gabriella Ferri", a popular yearly event, which took place between 2005 and 2011 and the attendance of various festivals, plays and musical performances.

In 2004 the band launchs a CD titled "Romana", for Godagoda Records, an indie label.

In 2012 it’s the time for the CD "Mettece Sopra" for GoodFellas, in that same year some songs were put in the launching of a vinyl disk titled "Mamma Roma Addio" (Goodfellas), together with other two songs by two folk-rock roman music scene actors, Ardecore and Il Muro del Canto, and also in the online compilation of XL di Repubblica.

Our performances and events we plan and take care of are strictly connected to the culture of Rome and the study of new cultural hybrids and cure of tradition, that’s why we create very articulate patterns using different languages (graphic art, poetry, literature, drama, and obviously music), in constant evolution.

In 2018 the third CD for BandaJorona is out, named “Io so’ me”, for the label Squilibri, the first one where Bianca Giovannini’s author soul shows up. Together with Desirée Infascelli, she puts a signature on most of the songs. The contribution of SCUP – Sport e Cultura Popolare, co-producer of the project, and of Acrobax-Renoize, where the great part of the recording took place has been fundamental for the CD’s life and promotion.

The constant evolution in the research among music, sounds and lyrics shows up with power in the creative process of recent years, leading to a renewed line-up of the band during 2020: the stories of the Roman underworld transpose coherently in the description of the multicultural reality where our urban fabric feeds itself, where traditional music is poured into wide-spectrum sound contexts thanks to the experimental use of electronics and of our own popular and folk roots.

In 2022 BandaJorona, while celebrating its achieved 21 years of life, tries to play with new sounds and languages choosing a folktronic key, and work on songs to be included in the new album, the fourth one in its long career.